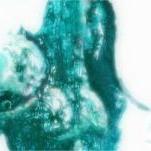 hair GEOMETRY TO HAIR MANY METHODS