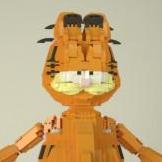 By PepperRules34, July 28 in Modeling